No Result
View All Result
Home Freelancing Development & IT

Bridging the gap between Linkbuds and WF-1000XM4- Technology News, Firstpost

Sony launched two prominent TWS earphones this year in India. First was the flagship WF-1000XM4 which still remains the best TWS earphones under Rs 20,000 here and the benchmark for active noise cancellation (ANC) in the segment. Then came the highly unusual Linkbuds that served a completely different purpose. While the former was about cutting the outside noise, the latter was about staying connected all the time.

The latest from the company, Sony WF-LS900N, also known as Linkbuds S globally, not just looks to bridge the gap between the two but strives to offer the best of both worlds. In many ways, one can also call it 1000XM4 Mini (unofficially) given the similarity in appearance and feature list. Can it be the midrange player that Sony needs to take on the likes of Oppo Enco X2 and some others? Let’s find out.

Sony WF-LS900N TWS Earphones: Design and comfort (8/10)
These earbuds look like a compact version of the WF-1000XM4 with a similar shape and design. These buds are a good 40 per cent smaller than the Sony TWS flagship and weigh just 4.8 grams each. They feel a lot more comfortable in the ear due to the smaller footprint and the fit is snug too. They don’t stick out the ears as much as the 1000XM4 and stay in place during jogs. The bundled silicone ear tips provide a good seal, and as a result, the passive noise isolation is quite good. A few more pairs of tips are bundled in case the default ones aren’t the best fit for you. Do spend a couple of minutes choosing the right ones. The build quality of the product is solid with a smooth matte finish and sizable touch zones at the back of the buds. The same finish extends to the compact and pocketable charging case that weighs 35 grams. The case has a USB-C charging port and a Bluetooth pairing/reset button at the back and a charge status LED at the front.

You get three colour variants of the LS900N – black, white and beige. Sony states that the buds are made of recycled plastic materials from automobile parts. Just like in case of some of their recently launched products, the packaging material is void of any plastic to keep things environmentally friendly. We appreciate this initiative. Sony WF-LS900N TWS Earphones: Features and specifications (8.5/10)
Despite the smaller footprint, the earbuds host a 5 mm driver each, along with Sony’s V1 processor that is present in the 1000XM4 too, as well as the ANC circuitry. Keeping the weight of each bud under 5 grams despite all that and without compromising on the battery backup is commendable. The Sony Linkbuds S supports SBC, AAC and LDAC codecs over Bluetooth 5.2. You get to choose between sound quality or a stable connection, and a codec is assigned accordingly. As long as the buds and the source device are in the same room, it’s best to choose the former and use LDAC codecs.

The earbuds are touch-enabled and let you perform a handful of tasks using single-tap, double tap and triple-tap gestures. The functions can be configured using Sony’s Headphones app. However, things are not as granular as I would have liked. Like in most Sony earbuds, the functions are available in sets and you cannot assign a specific function for a specific gesture. For instance, if you choose ANC modes for the left bud, just the single tap is used to cycle through them, while a double tap and triple tap are left unused, and you cannot assign anything to them.

The companion app also offers you multiple audios presets and an equaliser to create your own. These earbuds have an IPX4 rating for sweat resistance and can be worn during workouts without worry. You get wear detection sensors to pause the audio when you remove the buds from your ear and resume when you put them back on. You also get multipoint support here to pair these earphones with two devices simultaneously. Even better, unlike older Sony devices, you can use LDAC codecs even when using multipoint.

Sony WF-LS900N TWS Earphones: Performance (7.5/10)
The wireless range is good even with LDAC codecs with the audio staying smooth even at 10 metres with a clear line of sight between the buds and the source device. But that drops to less than half with a concrete wall in between. There were no latency issues either when streaming videos. You get three listening modes here – Noise Cancellation On, Ambient Sounds On and Normal mode (both off). You can choose any two or all three from the Headphones app.

The ANC may not be on the same level as the 1000XM4, but it is pretty effective and cuts down on a lot of low and certain midrange frequency sounds like that of a fan or hum of an AC. Even outdoors, it greatly reduces traffic noises and human chatter. As I mentioned earlier, the smaller earbuds coupled with the right-sized silicone tips provide very good passive noise isolation that makes the ANC more effective. The ambient mode here is one of the finest around with things sounding natural. This product does belong to the Linkbuds series after all that believes is staying connected with your surroundings. You can toggle through the modes by tapping the left earbud once. You can touch and hold the back of the left earbud to momentarily let ambient sounds through, just like in the case of Sony’s 1000XM series headphones. You can also choose Adaptive Sound Control to automatically switch ANC and ambient modes on and off depending on your location and surroundings. Features like speak-to-chat, DSEE Extreme audio upscaling, 360 Reality Audio and support for multiple voice assistants are also available on these Hi-Res Audio certified earphones.

The Sony WF-LS900N is sufficiently loud at 60 to 70% volume level. While these buds look like the WF-1000XM4, they don’t exactly sound like them. These earphones are noticeably bass-heavy. The bass is reasonably tight and punchy but it does impact the lower midrange frequencies. The vocal clarity is pretty good but the instrument separation could have been better. The highs are sharp with a good amount of sparkle. They do not sound sibilant but roll off a bit sooner than they should.

The overall detail in sound is good but not as good as the XM4 or even the Oppo Enco X2 for that matter. The sound stage is reasonably broad for TWS buds, and I got the impression that it feels just a tad broader when you turn on ambient mode. Most popular genres of music sound good on these earphones. The overall sound quality of the LS900N is enjoyable, but given its price tag, it is fair to expect a bit more resolved detail in the audio.

Sony WF-LS900N TWS Earphones: Call quality (7/10)
The call quality of the WF-LS900N is average at best. The person on the line was clearly audible, and I was heard with reasonable clarity by the other person too, but the transmitted voice lacked sharpness. When outdoors, the microphones do pick up some ambient noise but not excessively. So the noise suppression algorithm works reasonably well but probably ends up impacting the vocal clarity too. It is nowhere close to bad, but I expect better on premium products. 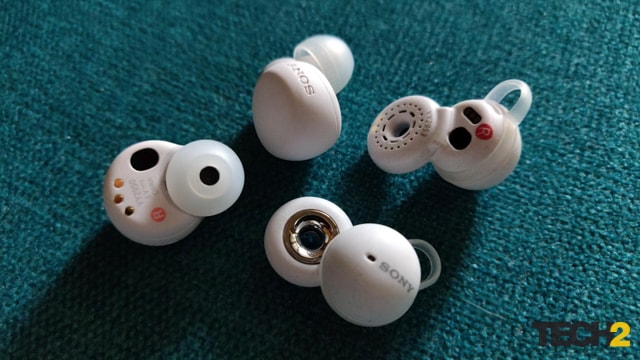 Sony WF-LS900N TWS Earphones: Battery life (7.5/10)
Sony claims a battery backup of 6 hours for the buds and additional 14 hours with the charging case, with ANC on all the time. During my testing, I got a little over 5 hours out of the buds with ANC switched on most of the time at 60 to 70% loudness. The case can recharge these buds twice more with some juice left in the tank, thus taking the total battery backup close to 17 hours with ANC on, which is not bad at all.

Generally, I would term 17 hours as average, but given that I was using LDAC codec all the time with ANC turned on, these are pretty decent numbers. With ANC switched off, these earphones should easily go past the 20 hours mark, perhaps even reach 24 hours. The battery status of each earbud as well as the charging case is visible on the phone. The app prompts you when the charge on the case drops below 30%.

It takes over two hours to charge the buds and case fully from zero using a standard USB-C charger. These buds support fast charging too, and just 5 minutes of charging can give you about an hour of playtime; a handy feature to have when in a hurry. Wireless charging that was present in the WF-1000XM4 has been given a skip here.

Sony WF-LS900N TWS Earphones: Price and verdict
The Sony WF-LS900N TWS earphones are priced at Rs 16,990 with a one-year warranty and can be purchased for Rs 13,990 effectively inclusive of cashback using certain credit and debit cards till the end of this month. Sony could have certainly been more competitive here, and in our opinion, the price after cashback should have ideally been its official price. Now, the company has been known to stick to the introductory price for a lot longer than the stipulated date, and I hope they do the same with the LS900N too. I will explain why.

At Rs 16,990, it is uncomfortably close to the WH-1000XM4, which is clearly a superior product in most departments. If someone is willing to spend that kind of money, they might as well spend 3K more and go for the flagship product that not just sounds much better but also offers better ANC. And that’s just the in-house competition. There are a few TWS earbuds available in this price bracket, but the LS900N needs to bother mainly about one – the Oppo Enco X2.

The Enco X2 sells for Rs 10,990, and actually sounds better than the LS900N, with more resolved detail and better balance. The Sony trumps it comfortably when it comes to ANC but there’s a lot going for the Oppo in addition to superior sound quality like better call quality and design to make it a better all-round option for your money, given the 6K price difference. If Sony can reduce the price gap by at least 3K, the contest would be a lot more even and provide the WF-LS900N with enough headroom and legroom to be a strong player in the sub-15K segment.