Avanti Feeds Share Price Is Falling. Read to Know Why

A major chunk of Avanti Feeds’ revenue comes from the shrimp business.(File)

Share price of Avanti Feeds has taken a hit on the bourses. The BSE 500 stock – is one of the leading providers of high-quality shrimp feed with good manufacturing capabilities.

On a year-on-year (YoY) basis, Avanti Feeds share price has fallen by 31%. 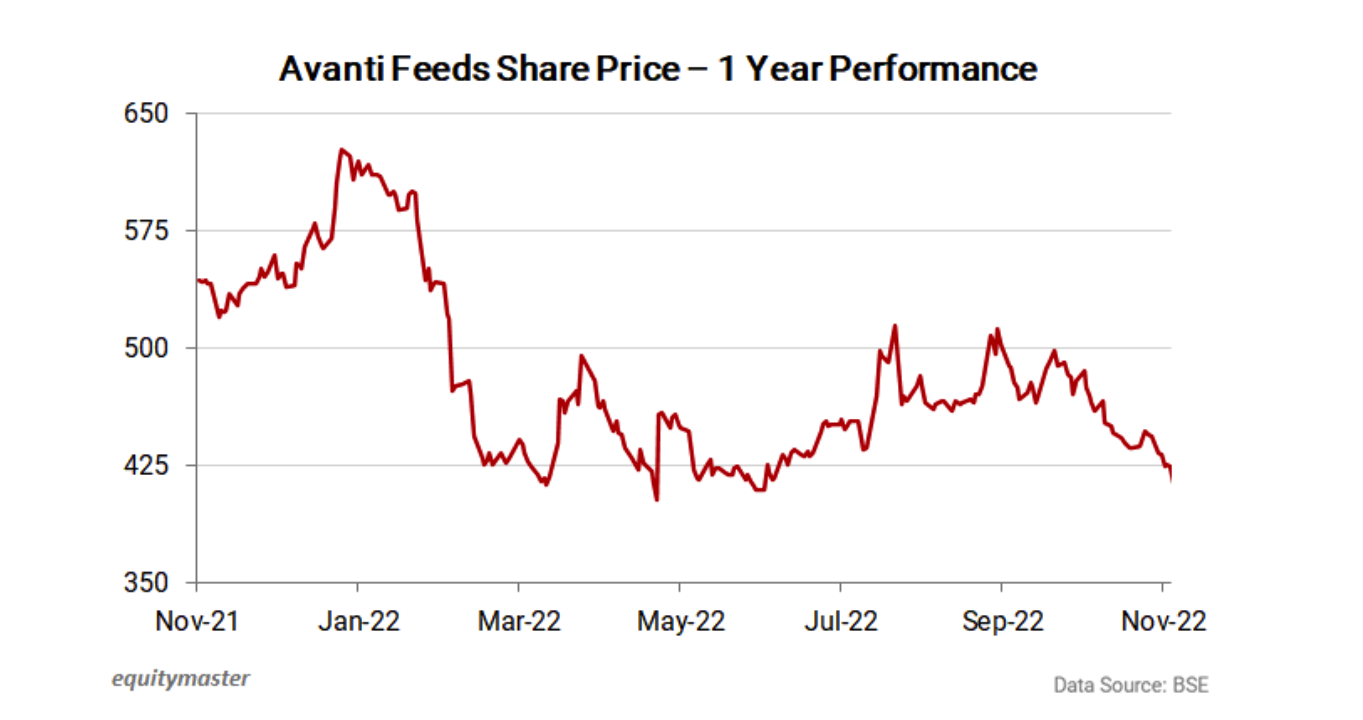 Recently, the company’s shares dropped as much as 5%, the biggest drop in the last 15 weeks.

Read on to know why.

The net profit for the same period came in at Rs 665 million (m), which is 10% lower compared to the previous quarter.

The company’s quarterly performance has been deteriorating for the last two quarters. There are several factors responsible for this.

There was a surge in shrimp demand from US and Europe in 2021 and early 2022. However, recently the demand has cooled off.

Even China was a big shrimp importer. However, the imposition of new lockdowns has hurt the demand. Thus, the global demand for shrimp is falling.

Traders have also been purchasing products with low prices showing the reason for the decline in exports.

Inflation has also impacted the aquaculture industry. Hence, the increased cost of production, stagnant supply, and the fall in demand have combined to hit the financial performance of Avanti Feeds.

A major chunk of Avanti Feeds’ revenue comes from the shrimp business.

Due to a delay in commissioning its new feed plant in Andhra Pradesh, the company has also witnessed a loss of market share. Meanwhile, industry experts believe that if the state government’s intervention in feed pricing continues, then the same could impact profitability.

This has dampened sentiment and the near term future of the company is uncertain.

Avanti Feeds – a debt free company is currently facing head winds. But this is not new. Back in 2018, the company experienced a similar situation.

Shares of Avanti Feeds plunged as much as 59% in 2018, the worst yearly rout since its listing in 2011, according to Bloomberg data.

A 20-25% drop in shrimp output in addition to higher prices of soymeal and fishmeal were largely responsible for the drop in earnings.

However, it emerged strong out of the battle. Increasing sea food demand and focus of the government on sea food exports, helped Avanti Feeds. Will history repeat itself? Will Avanti Feeds become one of the multibagger stocks for 2023? We will have to wait for the future.

Avanti Feeds is an Indian company which is engaged in the manufacturing of prawn and fish feeds and shrimp processor. The company’s operating segments include shrimp feed, hatchery, and wind mills.

It generates maximum revenue from the shrimp feed segment. Geographically, it derives a majority of revenue from India and also has a presence in the US and the rest of the world. Its product includes prawn feed, scampi feed, and fish feed. The dividend declared by Avanti Feeds for March 2022 is 625% i.e. Rs 6.2 per share.

(Disclaimer: This article is for information purposes only. It is not a stock recommendation and should not be treated as such.) This article is syndicated from Equitymaster.com

Featured Video Of The Day